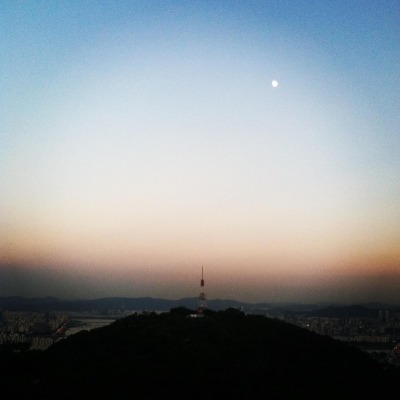 Five rows and eight per row, which makes forty.

I study the glass case and count them again individually, using my index finger like a conductor’s baton to tally each one. Again, I get forty. With a slight frown, I glance around the bustling platform at the Jongno Sam-Ga subway station in Seoul, South Korea, which seems to go on for miles in kaleidoscopic madness. It’s only my fifth day here, but I’ve already noticed that Seoul is a city of paradoxes; paradoxical people, generations, ideas, and architecture all bound by the same culture and history, unaware of the irony of their coexistence. The glass case is a perfect example. My eyes linger on it a moment longer before I start counting the motley crew of Seoulites suffusing the subway.

To my right is a young couple wearing matching striped button-downs, and over-sized hipster glasses without lenses. Adjacent to them, a hunched old man no taller than five-foot-three is eating an unidentifiable piece of fruit with trembling, wrinkled hands. To my left, four teenage girls sporting violently mismatched prints and patterns (at least to my Western eye) are crowded around a shared Samsung Galaxy smartphone watching a K-pop music video. That brings the total in my vicinity to seven, not including myself, and six if I count the matching couple as one (to which I’m sure they wouldn’t object.) 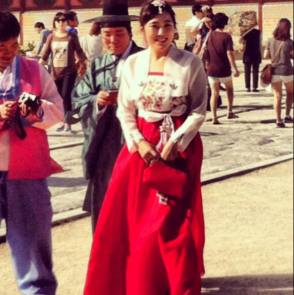 A woman dressed in traditional hanbok at Gyeongbokgung Palace in Seoul.

Just as I hit ten, a woman in a white jeogori and bright red chima wanders onto the platform and stops in front of the glass case, parallel to the group of teenage girls. I watch as she carefully adjusts the immaculate bun spun tightly atop her head, and then shuts her eyes as she awaits the train. She looks delicate and serene. Her traditional hanbok attire is in stark contrast to that of her youthfully modern neighbors (now miming the dance moves in the music video), and suddenly I’m reminded of Gangnam.

On my third day in Seoul, I ventured to the now infamous neighborhood known for its skyscrapers, expensive hotels, and upscale restaurants. My first stop was the COEX Mall, which boasts the title of Asia’s largest underground shopping center. Home to hundreds of shops, two food courts, and an aquarium, it’s an ode to Gangnam’s modernity and wealth. Directly across the street, however, is Bongeunsa Temple, a traditional Buddhist temple founded in 794 that still contains original architecture (although most of it was destroyed and rebuilt after the Korean War.) It stands subtly strong next to the sleek, contemporary design of the mall, yet the sight of these two landmarks shoulder-to-shoulder creates a jarring, old-meets-new effect that is slightly too literal. 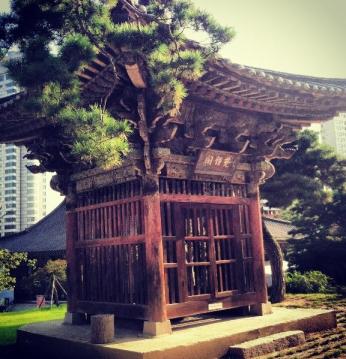 An example of traditional hanok architecture at Bongeunsa Temple, with a glimpse of Gangnam skyscrapers in the background.

Whereas Gangnam houses its paradoxes on the same block, other neighborhoods in Seoul contradict each other purely by existing in the same city. Take Hongdae, for example—with its Korean-fusion restaurants, hip cafés, indie-music scene, and artsy college students—just a short subway ride away from Bukchon Village, known for its traditional hanok homes, winding alleyways, and breathtaking mountain views. On my first day in Seoul, I sat on the floor of a traditional Korean tea house in Bukchon Village, dining on patbingsoo and omija cha (a flavorful Korean herbal tea that is simultaneously sweet, sour, salty, and spicy). A few days later, I ventured to Hongdae where I ate Indian curry (that tasted nothing like Indian curry), with a mandatory side of kimchi, in a cabin-sized restaurant operated by Korean-Americans flawlessly fluent in English.

Then there’s Insadong and Itaewon, whose names sound similar, yet they couldn’t be more different. The cobblestone streets of Insadong are lined with food carts, art galleries, street performers, and tea houses. The food carts are mostly run by old Korean grandmothers serving homemade, traditional eats that taste like love, and cost little more than a won. This is the place to go for real Korean street food like kimbap, ddeokbokki, hotteok, odeng, gaeran bbang, and (my personal favorite) dumplings, both fried and steamed. 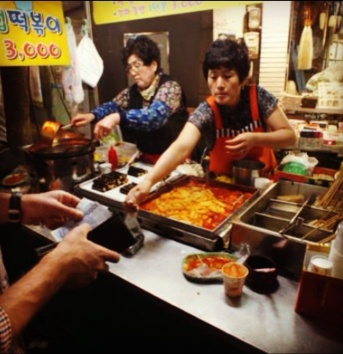 One of the many food carts of Insadong.

In comparison, Itaewon caters to a different crowd, mainly homesick expats and American soldiers searching for a taste of home. Here, you can find the Korean equivalents of Thai, Chinese, American, and Italian food, which never taste exactly as expected, but do the trick for those who can’t stomach pure Korean cuisine. Knock-off designer clothing stores stay open past midnight, along with street carts selling overpriced souvenirs just because they can get away with it. After sundown, the local prostitutes linger on the aptly nicknamed Hooker Hill, which might explain the abundance of foreigners better than the hit-or-miss restaurants. All of this—the malls and temples, mountains and skyscrapers, grandmothers and prostitutes—compromise the enigmatic Seoul. To me, the city feels time-warped, always toggling between then-and-now, simultaneously rooted to its past, and rocketing into the future.

All of a sudden, I’m jolted back to the present as a middle-aged man wearing a frilly cooking apron pushes past me with a handcart containing more frilly cooking aprons, causing the group of teenage girls to momentarily scatter, and me to remember I’m supposed to be counting. Thirty-one, thirty-two, thirty-three, taps the conductor. By the time I’m finished, the number of people on the platform has steadily risen to seventy or eighty, and my stomach drops as my math confirms the truth I knew all along: the forty emergency gas masks in that glass case would hardly save half the people on the platform in the event of nuclear warfare. 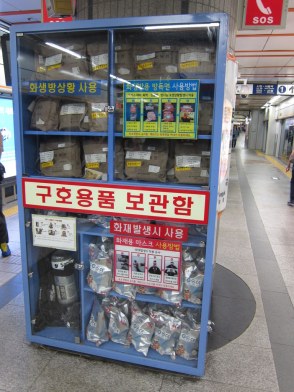 A case of gas masks on a subway platform in Seoul.

I consider taking a few precautionary steps toward the case, but at that moment, a jaunty tune erupts over the subway intercom (which I’ve learned precedes all announcements), and a robotic female voice says something in Korean, then English: the next train toward Byeongjeom is one station away. Taking it as their cue, the gaggle of teenage girls decides to add sing-along to their dance routine, as if flaunting their blithe disregard for war just as I’m having a minor panic attack. However, I seem to be the only person concerned about the gas mask deficit, furthering my paradox theory as the rest of Seoul seems to be casually ignoring the looming threat of attack from North Korea. I’ve never been to a city where a case of gas masks can sit next to a soda vending machine, and people don’t look twice.

Although, I suppose this is nothing new for Seoul, whose people have survived years of war, economic hardship, and famine. Like a phoenix from the ashes, Seoul rebuilt itself from the brink of total destruction in half a century to become a technologically-advanced, cultural epicenter worthy of hosting the Olympics and the FIFA World Cup, and even having an international chart-topper dedicated to their unique style (thanks, Psy.) To say that Seoul made up for lost time is an understatement.

With that thought, I have a sudden realization. Perhaps what I’m mistaking for casual disregard is actually humble courage in disguise. Maybe it’s not that Seoul is stuck in their tumultuous past, but that they haven’t had quite enough time to recover from it. Yet, they continue to strive toward excellence; erecting high-rises where ruins once stood, but never forgetting their culture and traditions along the way. Whereas other cities have had centuries to build their reputations as world contenders, Seoul has done it seemingly overnight. Today, it is the third largest, and second most expensive city in the world, and there doesn’t seem to be anything—not even war or the threat of combat—that can stop it from propelling onward.

A surge of respect for Seoul and its incredible achievements pulses through me, but at the same moment I see the train finally pulling into the station, and I’m involuntarily swept into the over packed train car. Wedged snugly between the teenage girls and the little old man, I shut my eyes for the crazy, slightly uncomfortable ride, wondering what other fantastic paradoxes I’ll discover in Seoul today. 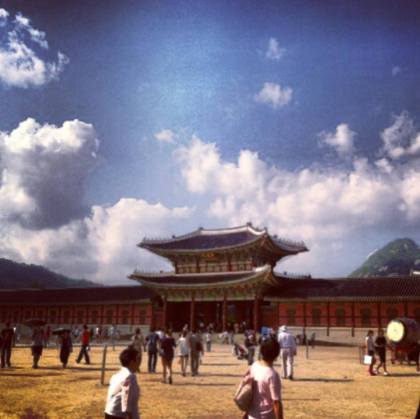 Click here for more photos from my trip to Seoul.